Most women will tell you that the gym is not the ideal place to get hit on. Most women at the gym are there on a mission. It’s likely she’s managed to carve out enough time in her busy schedule to work out and she would rather not spend more time there than necessary. It was enough for her to muster up the motivation to go to the gym. Don’t give her a reason to skip her next workout.

Secondly, if she’s working out really hard, she is most likely sweating and feels disgusting. This is not the time she wants to be noticed. This is when she’s hoping no one is paying attention to her.

I know what you’re thinking. “But all I do is workout at the gym. Where else am I supposed to meet someone?” Okay, if you absolutely must approach a girl at the gym, here are some very important tips to remember.

When to Definitely Not Approach a Girl at The Gym

✋When she’s on the stair master

✋ When she’s dripping in sweat

She’s not wearing them so much to hear the music as to not hear other sounds around her in the gym. Sometimes I continue to wear my wireless headphones even if the battery’s dead

✋ If she’s wearing a hat

I know, I’ve made this seem like a lost cause. I mean, it’s not entirely, but you should know what you’re getting into. This is dangerous territory and you must tread lightly if you hope to succeed. If you’re paying attention, a woman/or women will send pretty clear signals whether she/or they want to be approached or not. Here are some helpful tips.

Tips for Hitting on Women at the Gym (If You Must)

Now, if you’re one of those women whose unfortunately fallen victim of one of the guys who has read this post and decided to try these tips out for himself, here are some great tips for avoiding people at the gym (or anywhere).

I haven’t quite figured out how to be late enough to a party so that I’m not the first one to arrive, but not so late that I’ve missed the important parts. This is less of a how-to guide and more of a journey to how I figure out how to do this.

What do you do if you arrive before the other guests do? Do you sit in your car awkwardly? Do you turn around and go home and wait in your own living room until it seems appropriately late enough? How late is late enough?

Now, what if you decide to venture in early? Maybe someone walked and you’re not actually the first one (they didn’t and you are). What do you do now? The easiest thing to do is offer help to the host. How good are you at chopping vegetables? We’re about to find out.

I’m not a fan of small talk, but sometimes there are few alternative options, especially in situations like this. Assisting in the kitchen can help spur conversation. What are you cooking? Have you ever cooked that before? Actually, don’t ask that one.

When you run out of things to ask about the food (or they don’t need help in the kitchen), here are a few sample conversation starters. However, I do not guarantee they will work, but you are more than welcome to try:

I would also like to include that this quandary is not indicative of me getting older. It’s simply because it was ingrained in me to be early and I simply don’t know how to be super late. I basically have to give myself a “when the party really starts” time to aim for.

If you have any tips for this perplexing dilemma, please leave them in the comments below.

I’ve been trying to branch out and buy coffee from less mass chain establishments. In a big city like Toronto, that means more hipster. From the few I’ve attended so far, I’ve learned that they’re smaller, have less seating, and are filled with people. You would think a place with few places to sit would have less people in it. They also have less pastries/ food to choose from. However, they are quite aesthetically pleasing and make for a great photo backdrop. If you’re more hungry for a good Instagram photo than you are for lunch, you’ll be fine.

Today, my coffee shop of choice didn’t have anywhere to sit and I settled for a nice rock outside. It’s actually quite lovely with the sun and a slight breeze blowing through your hair. As far as the coffee’s taste, it’s fine. I mean, there’s nothing wrong with it, but it’s also not life changing and worth the switch from Starbucks. At least I can collect points towards a free purchase at Starbucks. It’s also a bit watery. Wait, are Americanos supposed to be made with water? They didn’t have iced coffee and I was forced to settle.

Another downside is that many of these hipster coffee establishments close super early. Like 6pm early. On a Saturday! I guess they want their employees to have a social life and enjoy their evening? What about my evening? I planned to sit here and use their free Wifi for the next few hours and now I have to find somewhere else to go.

I’ve decided to become a fighter (take a boxing class). Someone like Demi Lovato… or the name of a real fighter [Note to self, learn the names of fighters that make you sound tougher when referencing]. I know what you’re thinking. Who’s trying to fight you? You live in Canada. People are nice there. That’s what I tried to explain to the instructor. He keeps referencing people wanting to fight me and insists I be prepared. I don’t think he realizes I’m here for the fitness aspect. I don’t plan on taking these skills into the real world. I don’t want to get hit in the face. Right, no one plans to get hit in the face.

Things You Should Know If You Want to be a Boxer

Boxing is like no other sport. You will have many unexpected injuries, especially considering the only people you’re fighting are imaginary.

Gloves are measured in ounces.

Apparently this refers to the weight of the glove and not the amount of liquid it can hold. Judging by the amount of sweat they accumulated, I’d bet my gloves can hold a lot more than 14 oz.

You can get injured even if you’re not fighting anyone.

Skipping is a big part of boxing. Not the actual fighting part, but apparently every good fighter has rhythm and skipping is the way to do that. However, you should know that skipping ropes are basically whips. Until you get the hang of it, you should be prepared for welts. I guess they’re not so much welts as raised slash marks. Either way, you’ll look like you lost an argument with a tiger.

It’s possible to jump wrong. If you jump wrong, your knees will be very sore and you will limp around work feeling that as soon as you hit 30, your body started to fall apart. Don’t worry, this can be corrected with practice and learning to jump better. It might take a while, though. You should have lots of ice on hand and plenty of Advil.

You’ll have to learn how to take a body shot.

One of the first exercises you will partake in as a fighter in training is learning to take a body shot. Again, who’s trying to punch me in the stomach? You will lie on the ground with your abdominal muscles flexed while another individual in the class drops a medicine ball on your stomach…repeatedly…from a couple of feet above you. This is to get you used to someone coming up to you and unexpectedly punching you in the stomach. It’s an incredibly odd feeling that you can’t prepare for. I’ve been told this is what getting the wind knocked out of you feels like. As I’m not a natural fighter, the only time I’ve experienced a similar feeling is when I fell out of a hammock, flat on my face. Don’t worry, the more you practice, the less it will hurt, except when your instructor kicks it up a notch and the ball is dropped from much higher. 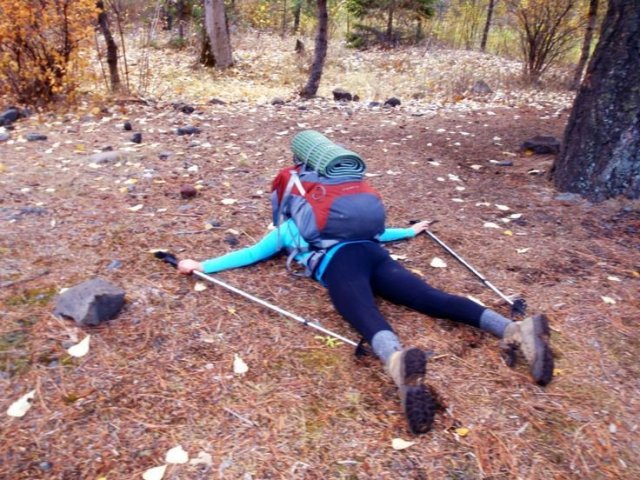 I workout fairly regularly and would consider myself strong-ish. I mean, I’m no bodybuilder, but I’ve moved past the sissy dumbbells. However, I have recently become aware that being strong at the gym and being strong in real life are two very different things. It’s similar to being book smart and street smart. You might think you’re strong because you can lift objects with cushy handles, but using your strength in real life is a different story!

Are you strong or do you just workout?

For those of you city-dwellers who have never been faced with this survivalist task, it’s much harder than it looks. Sure, it’s easy swinging an axe and getting it stuck in the log. It’s another thing entirely to have enough strength to power right through the log.

Going for a Hike

Once you find your rhythm, walking, or even running on a treadmill is fairly simple. Going on a hike in the great outdoors is yet again, very different! You will be thrown by the uneven terrain and the fact that you’re actually travelling beyond a stationary spot like in your gym. Embrace the added benefit of fresh air.

Moving Quickly for a Long Period of Time (aka Endurance)

Activities may include rowing (an actual boat) or paddle boating. Basically, anything that requires cardiovascular activity. It’s one thing to have the strength to do something for a short stint. It’s another to have the endurance to paddle around a whole (small) island.

I may have discovered the difficulty of this task at the gym, but it definitely applies to real life (survival) situations. Sure, it’s easy when you have your legs moving you from one point to another. It’s much more difficult when all you have is your arms. My arms may look strong, but when put to the test, they don’t do so great. I’m regretting not playing on the monkey bars more as a child.

A Laptop In The Wind
Blog at WordPress.com.