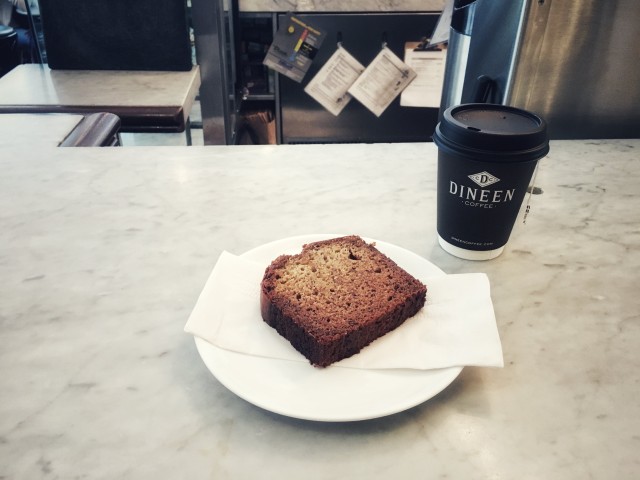 I’ve been trying to branch out and buy coffee from less mass chain establishments. In a big city like Toronto, that means more hipster. From the few I’ve attended so far, I’ve learned that they’re smaller, have less seating, and are filled with people. You would think a place with few places to sit would have less people in it. They also have less pastries/ food to choose from. However, they are quite aesthetically pleasing and make for a great photo backdrop. If you’re more hungry for a good Instagram photo than you are for lunch, you’ll be fine.

Today, my coffee shop of choice didn’t have anywhere to sit and I settled for a nice rock outside. It’s actually quite lovely with the sun and a slight breeze blowing through your hair. As far as the coffee’s taste, it’s fine. I mean, there’s nothing wrong with it, but it’s also not life changing and worth the switch from Starbucks. At least I can collect points towards a free purchase at Starbucks. It’s also a bit watery. Wait, are Americanos supposed to be made with water? They didn’t have iced coffee and I was forced to settle.

Another downside is that many of these hipster coffee establishments close super early. Like 6pm early. On a Saturday! I guess they want their employees to have a social life and enjoy their evening? What about my evening? I planned to sit here and use their free Wifi for the next few hours and now I have to find somewhere else to go.

Downtown parks have way more variety than parks in the suburbs. Sure, you have the typical runners and Frisbee enthusiasts, but there are so many more groups of people that you just don’t find in the suburbs.

Who You’ll Find at a Hipster Park

Another thing that can often be found in a hipster park is a garage sale. Hipster garage sales are not like ordinary garage sales. I grew up in a place where a garage sale meant collecting all of your old toys and clothes and hoping someone else wanted them. If someone was willing to pay you $10 for your “vintage” friendship making kit, that was a steal! I recently ventured downtown and learned that garage sales mean something very different here.

I don’t understand how all of these people just “happen” to have antique glassware and (overpriced) records they’re trying to unload. It would also appear that used hats are all the rage (Head lice risk? No, thank you).

Of course fan clubs meet in hipster parks. Now I’ve never seen Orphan Black, but from the fan club, it would appear to have something to do with clones and pencils. Black clothes and yellow hair also seem to play a role. Oh, they have press-on tattoos…I wonder if they have any that aren’t Orphan Black related.